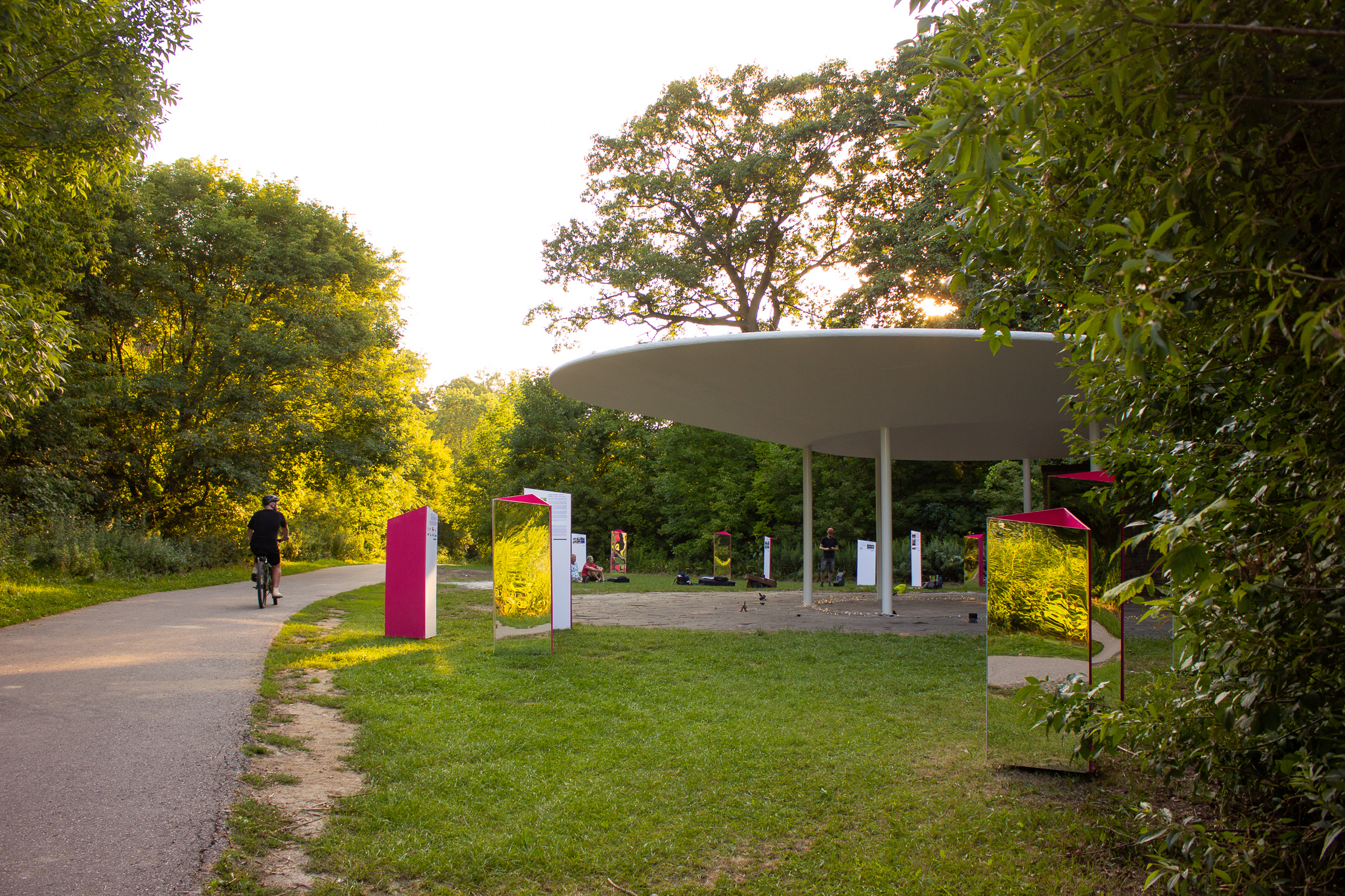 In 2019, the charitable non-profit Architectural Conservancy of Ontario’s Toronto branch (ACO) and Giaimo Architects received PSI funding to restore and revitalize a 1959 space-age park shelter along Etobicoke’s Humber River Recreational Trail. The Oculus, which looks like a spaceship parked along a wooded trail, had fallen into terrible disrepair.

The Oculus in 2019. Credit: Stephanie Mah

The Spirit of Optimism

When first unveiled, the modernist park pavilion designed by architect Alan Crossley and consulting engineer Laurence Cazaly featured washrooms, storage, a shaded concrete canopy with oculus opening and a flagstone patio. The modernist design and use of simple materials epitomized the optimism of Toronto’s post-war years.

As Spacing Magazine shared, “Though Crossley and Cazaly were only designing a rest stop, their blueprints elevated a simple structure to something truly exceptional and joyful.”

This same optimism fueled the restoration project. Delayed by a year because of the pandemic, the two groups were truly unstoppable. They continued their work, even as the city battled the gloom and doom brought on by months of isolation.

“People in the community were asking, ‘when are you doing something?’ says Stephanie Mah, VP of ACO’s Toronto Branch and project co-lead. She adds, “we couldn’t have this project be yet another disappointment.” Ria Al-Ameen from Giaimo concurred: “With everything shuttered, we realized this outdoor space could serve a higher purpose. We could capture the original optimism and lift people’s spirits.”

Together, they launched Brighter Days Ahead in the fall of 2020. The temporary public art installation transformed the Oculus into a literal symbol of the joy-the sun. Radiating vinyl yellow stripes were carefully applied to the structure. Like magic, the pavilion was transformed by beams of sunlight glowing across the canopy.

People across Toronto rediscovered the pavilion and understood the optimization inherent in its design.

While ACO specializes in heritage conservation, most of their previous work was focused on galvanizing community support to preserve heritage buildings.

“The PSI grant gave us a new opportunity to expand the kind of work. We’ve seen how tangible changes like restoration and community programming help draw people to a place,” says Mah. Giaimo has expertise in highly technical heritage restoration. But, the pavilion is of a much smaller scale than typical architectural conservation projects. “We usually work at a much bigger scale,” says Giaimo’s Al-Ameen, adding, “but we all agreed that the Oculus is small in the most wonderful kind of way.”

The restoration of the pavilion included cleaning the exterior, applying an anti-graffiti coating, restoring and painting the columns & the canopy, refurbishing the flagstone, and installing new seating. The bulk of restoration work including two concrete benches designed by Giaimo is now complete. A City of Toronto heritage plaque will be revealed later this year. Daily, people walking and biking along with the trailing stop and thank the team for bringing the pavilion back to its former glory.

Bringing People Back to Oculus

Part of the Oculus’ appeal is its presence along a secluded, wooded pathway. That same isolation makes the pavilion vulnerable to vandalism and misuse.

“You can restore a place, but that doesn’t prevent it from becoming derelict again,” says Mah. With this in mind, ACO and Giaimo are using the PSI grant to host events that bring the community back to the pavilion, helping them see it as their gathering place.

With lockdowns lifting, the two groups have launched their latest public exhibition with this express purpose.

From now until September an art installation featuring uplifting, brightly coloured and mirrored panels features engaging information about the space’s past and future. Of course, this includes a panel dedicated to answering the perennial question: “Why does it look like a flying saucer?”

It turns out, from space-age architecture to the role of park pavilions, The Oculus has many stories to tell. Giaimo designed the educational panels as triangular prisms to compliment the bold geometric forms that define the modernist structure. Designing the panels to meet the City of Toronto’s maintenance and safety needs was no simple task.

“We had to redesign the exhibit a few times to get through the approvals process,” says Al-Ameen. And, of course, installing without road access presents a whole host of challenges. But, the two teams were determined to re-envision the Oculus as an essential neighbourhood outdoor amenity and landmark.