How the sustained efforts of residents led to the rebirth of a green space. 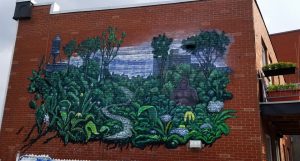 Virginie Gauvin, a Mechanical Engineer, a master's student in Urban Planning and the sixth and latest board member to join the organization in 2019, shared the history of the area where the new Gorilla Park will be developed. 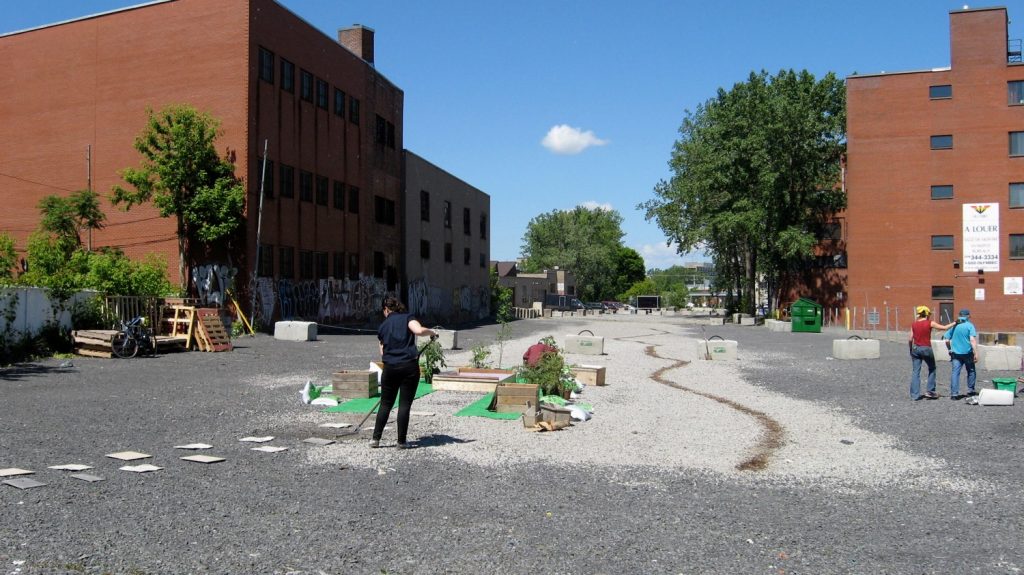 Even before it was recognized as a park, the site was significant because it has a rich history. Previously owned by CP Rail, railway tracks covered the entire site, from Jean-Talon Station to the Port of Montreal*. After it was closed in the 1990s, nature gradually took over and reclaimed the site. It was then that the residents of Marconi-Alexandra began to explore the site, primarily because there were no other green spaces in the area. In fact, Frances Foster*, an artist and resident of the neighbourhood who gave the site its name, defined it as a wild site inhabited by creatures, which she identified as gorillas. Then, once it was sold in 2013 to real estate developer Olymbec, overnight the trees that proliferated across the industrial site disappeared.

"They chopped down all the trees on the property without a permit, and even if they had had a permit it would have still come up. That's when residents came together because one of the last remaining natural spaces in the neighbourhood and the area had just been destroyed." - Virginie Gauvin

The group, consisting of a small number of residents, mobilized to defend their green space and stop a condo development planned by the new owner. The Friends of Gorilla Park was established* to protect the green space and started out with five members. Since then, the group has been campaigning to have the space revitalized. A number of activities such as exploratory walks explaining the area's past and co-creation workshops on the future park's development have taken place. In 2016, after 4 years of informal advocacy, the group incorporated as a non-profit organization (NPO) and produced its first official annual report* in 2017.

"I think that all the envisioning that has gone on around the park, which was still necessary from a citizen engagement point of view, has been a highlight of our processes." - Virginie Gauvin

As a result of grassroots pressure, the site was purchased by the City of Montreal, which is planning to turn it into a park in 2022. The City plans to establish a co-management agreement with The Friends of Gorilla Park. Following a series of public consultations* and a co-creation workshop on the future design of the park, a virtual information session was held on March 31, 2021, to introduce the final design concept*. The NGO will now be part of a new co-management partnership with the City of Montreal (e.g.: selected maintenance tasks and community event organization).

“We’re trying to give everyone a voice.” - Virginie Gauvin

Gauvin says that the group’s decision-making structure has always been highly organic, but the Board of Directors handles follow-up on the most urgent issues. In January 2020, the group brought in a series of statutes and by-laws to govern their activities. The Board meets once a month and all decisions are made by them. Their overall mission consists of “contributing to the greening of the public space in the Marconi-Alexandra area through the restoration of green spaces and development of public areas with, by and for the community.” However, Gauvin says that the group is also engaged in dealing with a number of day-to-day issues.

"First, since the land has been purchased by the City of Montreal and a park is to be built on it in 2022, what is taking up a lot of our time is the entire matter of coordinating the future agreement with the city. We're like the spokespersons for the residents!"- Virginie Gauvin

Also, according to the engineer, there are a number of municipal officials on these monitoring committees. For example, there is a project manager from the City of Montreal who is assisted by urban planners, people who work on landscape planning and a project manager from the borough. She also explained that at the beginning there was only one member of their Board who attended these committee meetings in person, but since then they have been meeting online and all members attend. 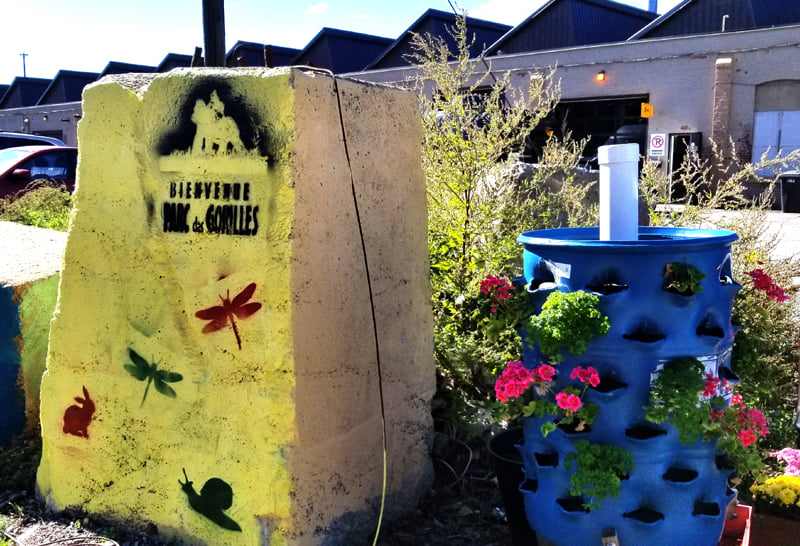 Also, given the site’s unique past, the non-profit is interested in preserving the area’s industrial heritage and wants to ensure that it is incorporated into the final development.

"We're really at a turning point because the organization has totally changed its goals. Up until now, it's been about mobilization, about activism to get a message out. But now we're going to enter a phase where we will be managing the space, and so we have to redefine ourselves based on that." - Virginie Gauvin

One of the biggest challenges with the park is the issue of safety. While awaiting permanent development the space is constantly changing. This makes safety more complex. "The area is surrounded by large concrete blocks, but recently they have been pushed around, people have been parking there, and there is also the issue of snow removal... We had thought of using piled snow to create a sliding area, but there are still safety issues," says Gauvin. As a result, activities on the site are quite limited. 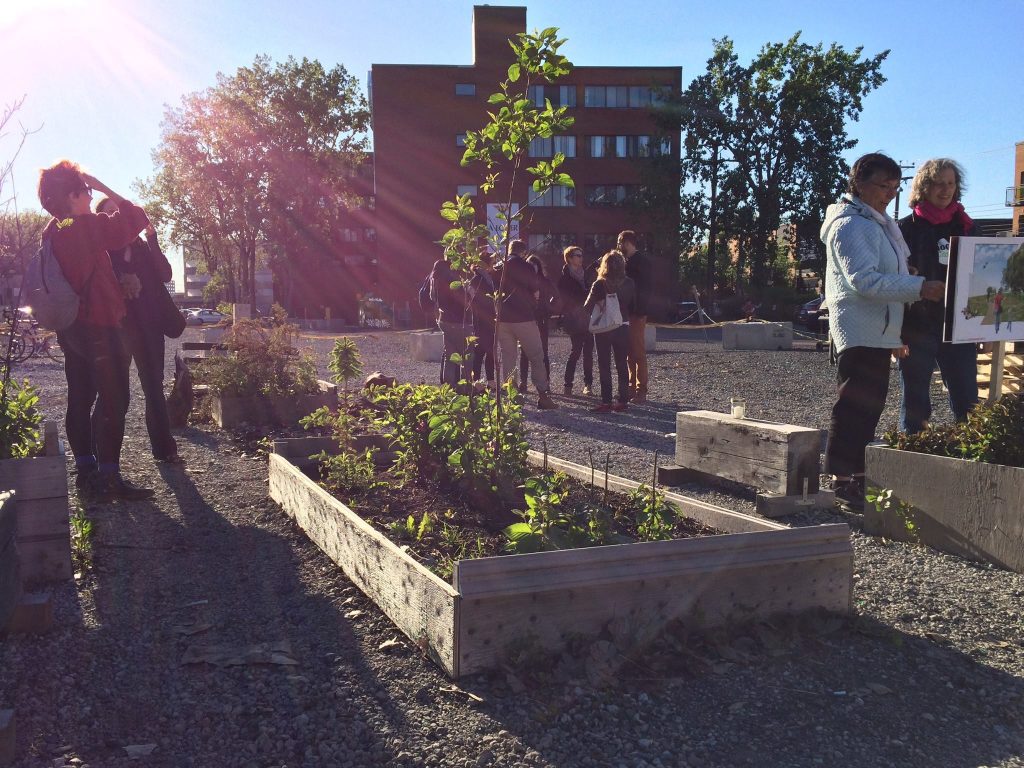 In addition, maintaining the site remains a huge challenge, especially when the space is used for events. Since it is not officially a park, the borough seems limited in its capacity to maintain the space or provide infrastructure.

"For example, this summer we wanted to use the space but we couldn't have any garbage cans, we couldn't have any toilets, we didn't have access to water, it's not necessarily something that the organizations could give us but for sure we are quickly limited if the borough says “no, we can't add a garbage collection point." We're not going to go and pick up the garbage ourselves ..." - Virginie Gauvin

As for the future park planned for 2022, the group is advocating more for a relatively natural environment, including a mini urban forest that would include plants and pedestrian crossings. The interest in the natural environment is also reflected in a desire to bring biodiversity back to the area through extensive greening and demineralization. Therefore, according to a student in urban planning, they will have to focus on education and environmental awareness so that park users will adopt exemplary behaviours that preserve the fragile ecosystem's balance.

The issue of potential conflicts in usage (e.g., pedestrians versus cyclists) is also a major concern for the group. She mentioned that the group does not want Gorilla Park to become an extension of the Carrières bike path, which could compromise pedestrian safety.

The non-profit is concurrently facing a number of internal issues, including in the areas of communications and human resources. Last summer, efforts to establish on-site summer programming raised challenges for the group. “There's a lot of coordination required (emails, managing a planning schedule, regular communications, etc.), and it takes time and you need to respond, which is somewhat more difficult when you’re talking about a volunteer position," says Gauvin.

The joint management agreement to be signed with the City of Montreal makes Gauvin concerned about the investment of time and energy required for volunteers, who also have other obligations. Delegating certain administrative tasks to volunteers is complicated because the park is in the process of being formalized: "When there were more concrete development projects in summer, it was easier.” The non-profit, which is currently in the process of redefining its objectives, finds itself in a complicated situation because its members will now have to set up new committees and delegate certain responsibilities.

The non-profit is also addressing how to seize on funding opportunities from private companies while avoiding too much sponsor visibility on the site. "We asked ourselves how do we accept this type of private funding (sponsorship)? Do we accept it with certain conditions? Such as no signage, for example? It's something we don't yet know how to manage," says Gauvin.

Although Gorilla Park has been the subject of a number of university studies, the expertise of the non-profit’s members have been called upon very little by students and researchers, complains the urban planning student. She believes that this type of collaboration needs to be developed further, in order to meet certain of the group's specific needs.

“Everybody talks about it, but nobody talks to us.” – Virginie Gauvin