Taking indoor programming to the park

It is proven by research that kids do not spend enough time in parks. The question is, how do we get young people off the couch and back into parks? We asked Shakeera Solomon from Vision of Hope Resource Centre in Brampton what they learned when they took monthly programming outside, into the park. 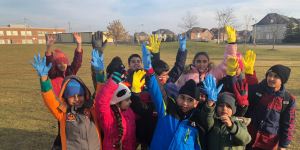 “When I was a kid, everyone was in the park.”

It’s true. And it’s also true (as proven by research) that kids today don’t spend as much time in the park. The question is, how do we get young people off the couch and back into parks?

In 2019, Shakeera’s organization applied for and received a TD Park People Grant. The grant was for Vision of Hope’s Youth Council to take monthly programming outside, into the park.

Here’s what they learned along the way.