Facilitating community living through greening: when local organizations come together and citizens become agents of change. 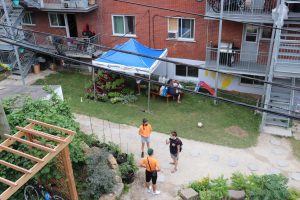 "RaCINE Mtl-Nord is a space where the community can come together. We talk about everything that affects life in the neighbourhood. We fight against discrimination, racism and prejudice, and we work to improve life in the community, the situation facing our young people and the living conditions of our residents." - Pice-Marc Ntigahera

Faced with the challenges of this densely populated neighbourhood made up of long-term residents and new arrivals, the group Parole d’excluEs*, which fights against poverty and social exclusion through citizen mobilization, launched the RaCINE residents committee in 2014. To address the critical need for food security and green spaces the residents’ group launched the large-scale greening project known as Quartier 21*: Vivre, nourrir et valoriser Montréal-Nord* in 2016. The project is designed to combat the effects of heat islands and promote urban agriculture as part of a food system designed to serve everyone. It includes a number of initiatives, among them the redevelopment of 16 lots owned by the Société d’habitation populaire de l’Est de Montréal (SHAPEM). 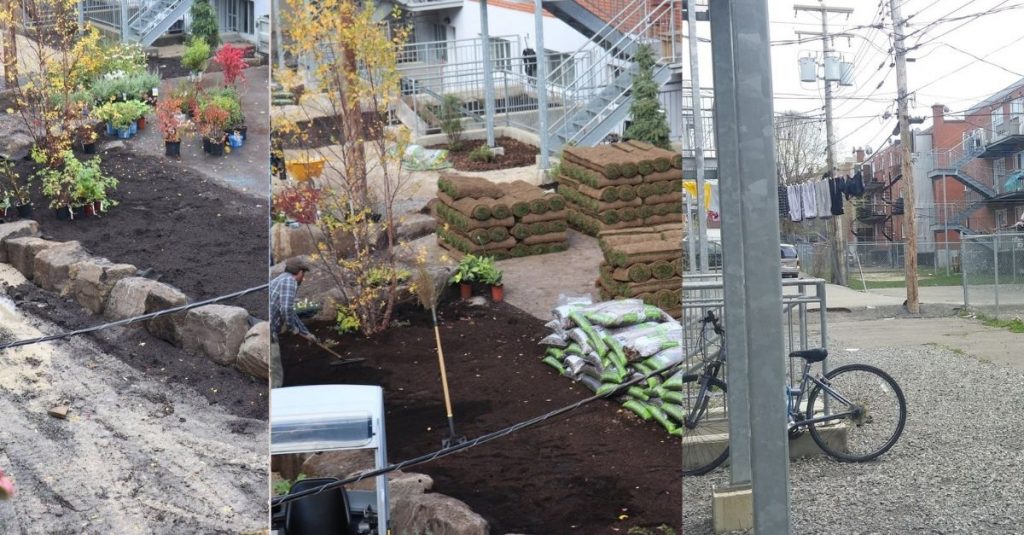 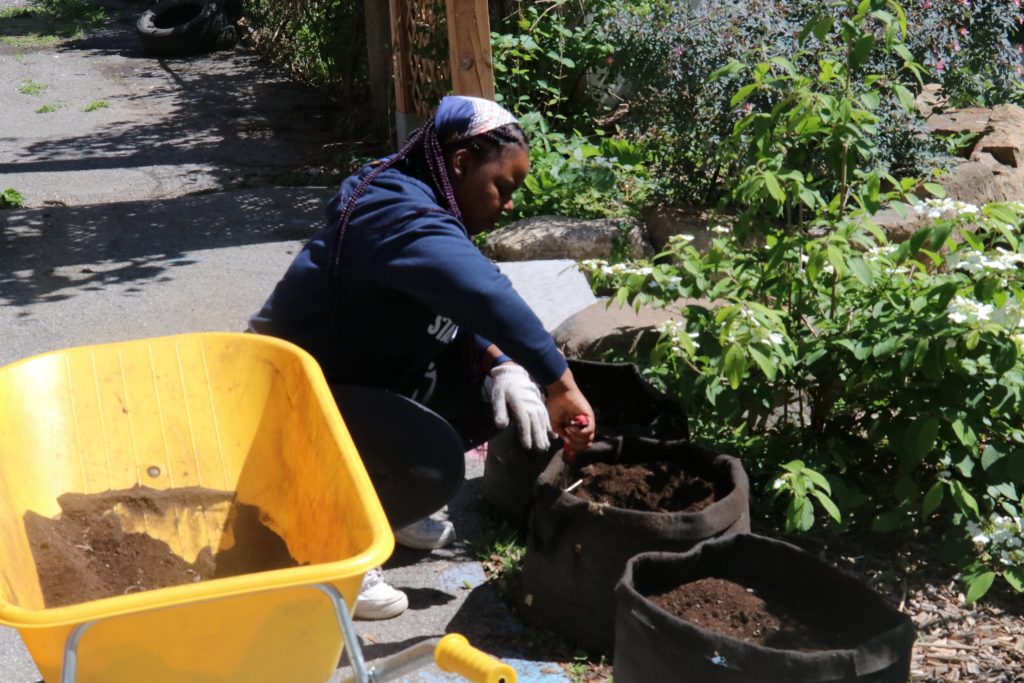 In the first phase, four paved backyards owned by SHAPEM were used to establish a common space (L'Espace Lapierre) and temporarily outfitted the space with temporary furniture, gardens and activities. 56 housing units occupied by families from the North African and Haitian communities use the temporary public space. The second phase (2018-2019) focused on a new, permanent Lapierre community space. L’Espace Lapierre was officially opened on September 20, 2019. The result of a participatory process that involved residents and community organizations, the project has established a meeting space and a cool oasis for the residents.

"It takes a community and people who are willing to talk to one another, share a meal together, share recipes, and get to know one another. To overcome the fear of the other, to find common interests, despite all the cultural, economic and social differences." Pice-Marc Ntigahera 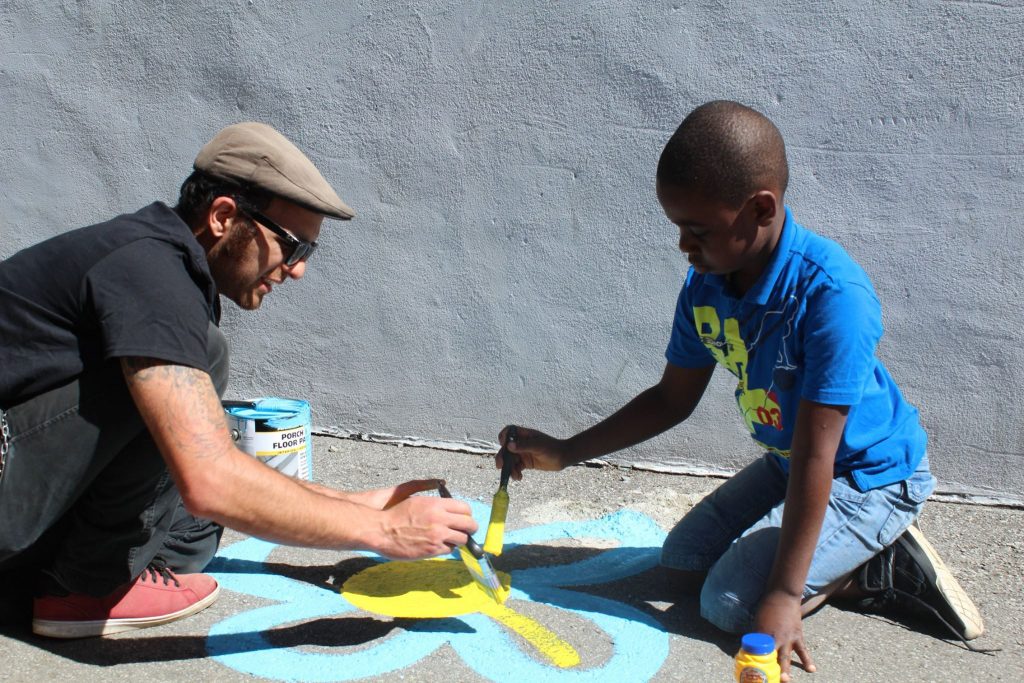 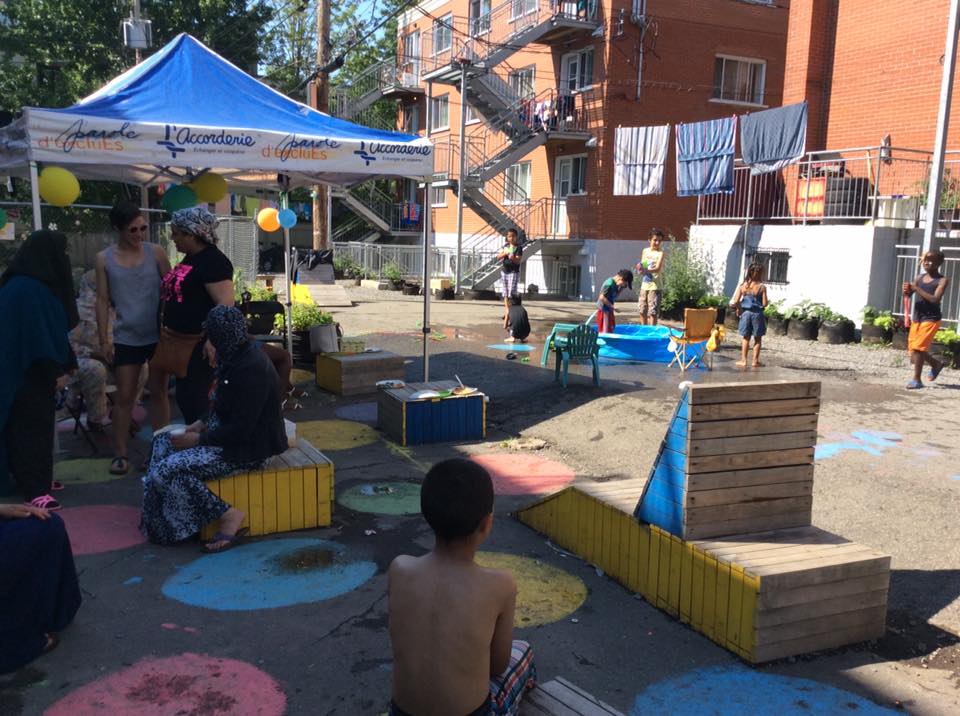 "When young people are able to participate in sports, they tend to not drop out of school as much, and they're healthier. Playing on beautiful fields creates a sense of pride." - Pice-Marc Ntigahera

Espace Lapierre is the result of Racine Mtl-Nord’s collective efforts. While creating a space for youth was a high priority, the larger objective is to create ways to bring the entire community together through activities like supervised sports, social and cultural events (such as basketball games, movies, storytelling, theatre, or neighbours’ parties, etc.). But it also provides a space for relaxation and discussion. “In summer, the space just comes alive," proclaims Pice-Marc proudly. He does say, however, that in the winter, the children often have fun playing in the snow in this neighbourhood space, so much so that this year, they installed a backyard rink with snow sculptures.

"People were surprised at first, but they came to enjoy it." - Pice-Marc Ntigahera

Green spaces featuring edible plants designed by Ismael Hautecoeur, a landscape architect and food production expert from Système alimentaire pour tous* helped residents gain knowledge about how to start seedlings, and how to maintain vegetable plots. The gardens give residents a sense of autonomy over their access to food and allow them to build community while engaging in environmental stewardship. Pice-Marc also shares that for the RaCINE Mtl-Nord group, the knowledge learned in the gardens is being passed on to younger generations is paramount.

As is the case with many of the area’s apartment buildings, the yards of rue Lapierre residents were paved over as soon as the builders had finished putting them up several decades ago. Simply greening up these spaces represents what might be called a “historical retrofit,” stated Ismael Hautecoeur, the landscape architect for Parole d’excluEs. -

"It enables us to teach the children how to appreciate the value of plants, to love the earth, to care for the environment. To be aware that in the spring the flowers are beautiful. To plant. To green-up. To beautify our living space—it changes everything and makes everybody happy.*"- Pice-Marc Ntigahera

Redeveloping the space has helped support the principles of community living and has improved civic-mindedness, safety and enhanced neighbour relations.

Waste management was one of the major challenges that Racine Mtl-Nord faced with the revitalization of Espace Lapierre. Citizens and neighbourhood organizations have been spent several years advocating for the installation of semi-underground waste containers* as a way to improve area cleanliness and the quality of life of the local residents. In the meantime, residents and local organizations have taken on greening projects and clean-ups that have led to a strong sense of community involvement and have built residents' sense of ownership over the semi-public areas.

"People help one another with watering the plants, they get involved in projects and they enjoy it. It's not hard to get people involved. The local organizations also help facilitate these types of community projects. The borough also helps us and lends us equipment."- Pice-Marc

According to a publication of the Conseil régional de l’environnement de Montréal*: "Since 2016, Parole d'excluEs has observed certain changes in habits, with notable signs of reappropriation, which confirms that what we are doing is bearing fruit. More and more families are coming forward to take care of the landscaped spaces, more children and women are turning out, children are becoming more interested in greening activities, balconies are greener, there is very little vandalism, and there is also an undeniable sense of pride. We are gradually convincing the most skeptical that it is possible to beautify and improve the neighbourhood."

The area's socio-economic and cultural diversity and the number of local organizations involved in the group meant that forming the group required a great deal of patience. Nomez Najac, who is responsible for the mobilization in Montréal Nord’s North-East sector of Parole d'excluEs, plays a key role. However, the groups involved in Racine Mtl-Nord are all underfunded and much of the work is carried out by volunteers. The group believes that some form of compensation, such as free public transit tickets, would be one way to recognize the contributions of volunteers. 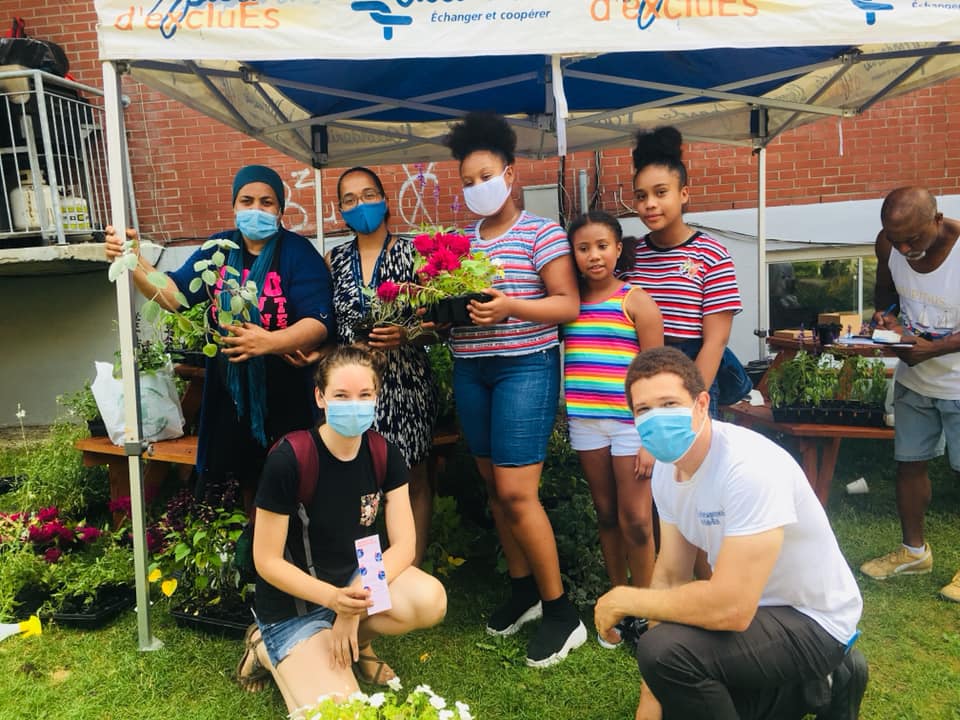 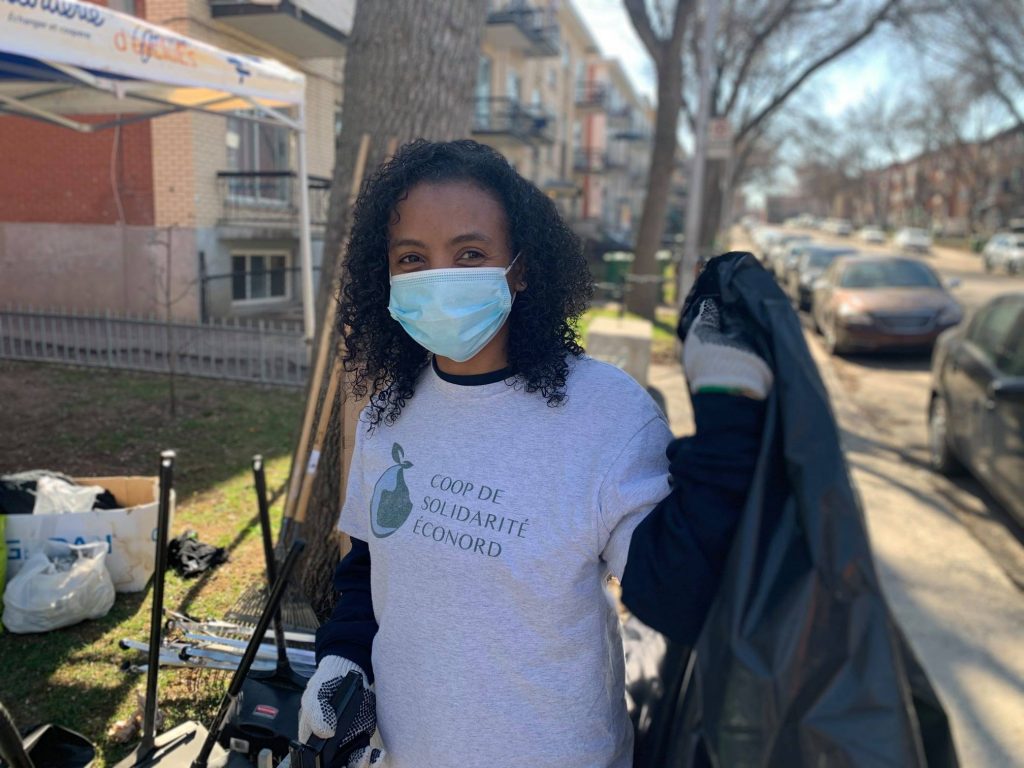 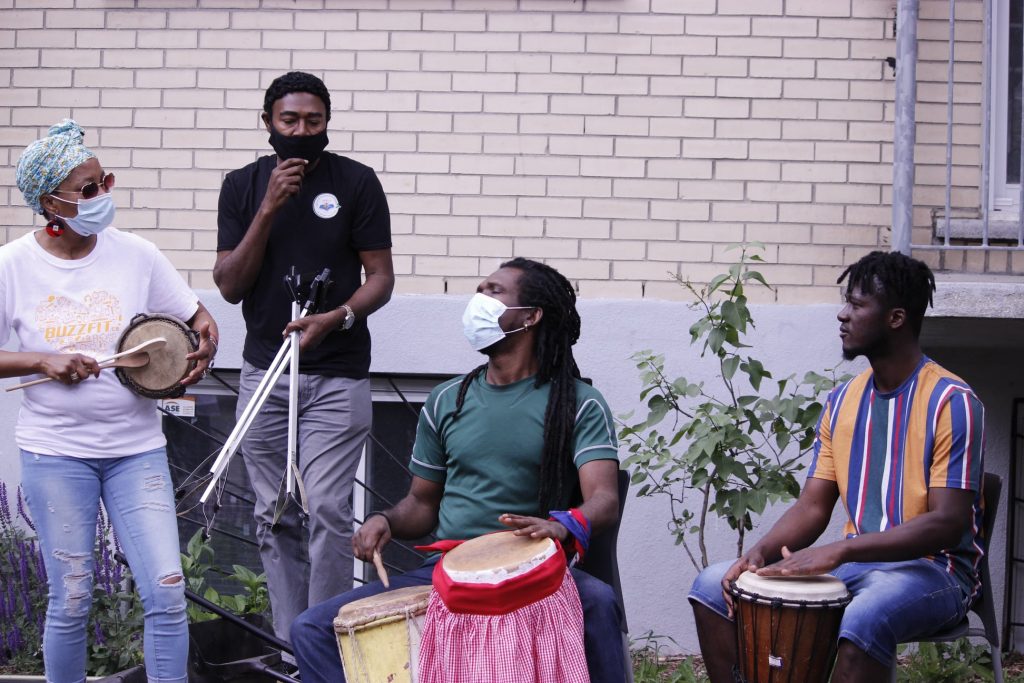 Credit: Facebook page Racine Mtl-Nord. The photo was taken prior to March 2020.

The group’s next challenge is to establish a larger community space that connects to Espace Lapierre. "We meet on the last Thursday of every month," confirms Pice-Marc. Their goal is to have a place for indoor and outdoor interactions that meet the neighbourhood’s public health and social justice goals. Growing social inequities, compounded by the pandemic have further stigmatized these communities. A a number of local community organizations, such as Comité logement de Montréal-Nord*, Hoodstock, La Société d’habitation populaire de l’Est-de-Montréal, Parole d’excluEs* and Un Itinéraire pour tous*), recently joined their together a united plea for A peaceful future for Montréal-Nord*.