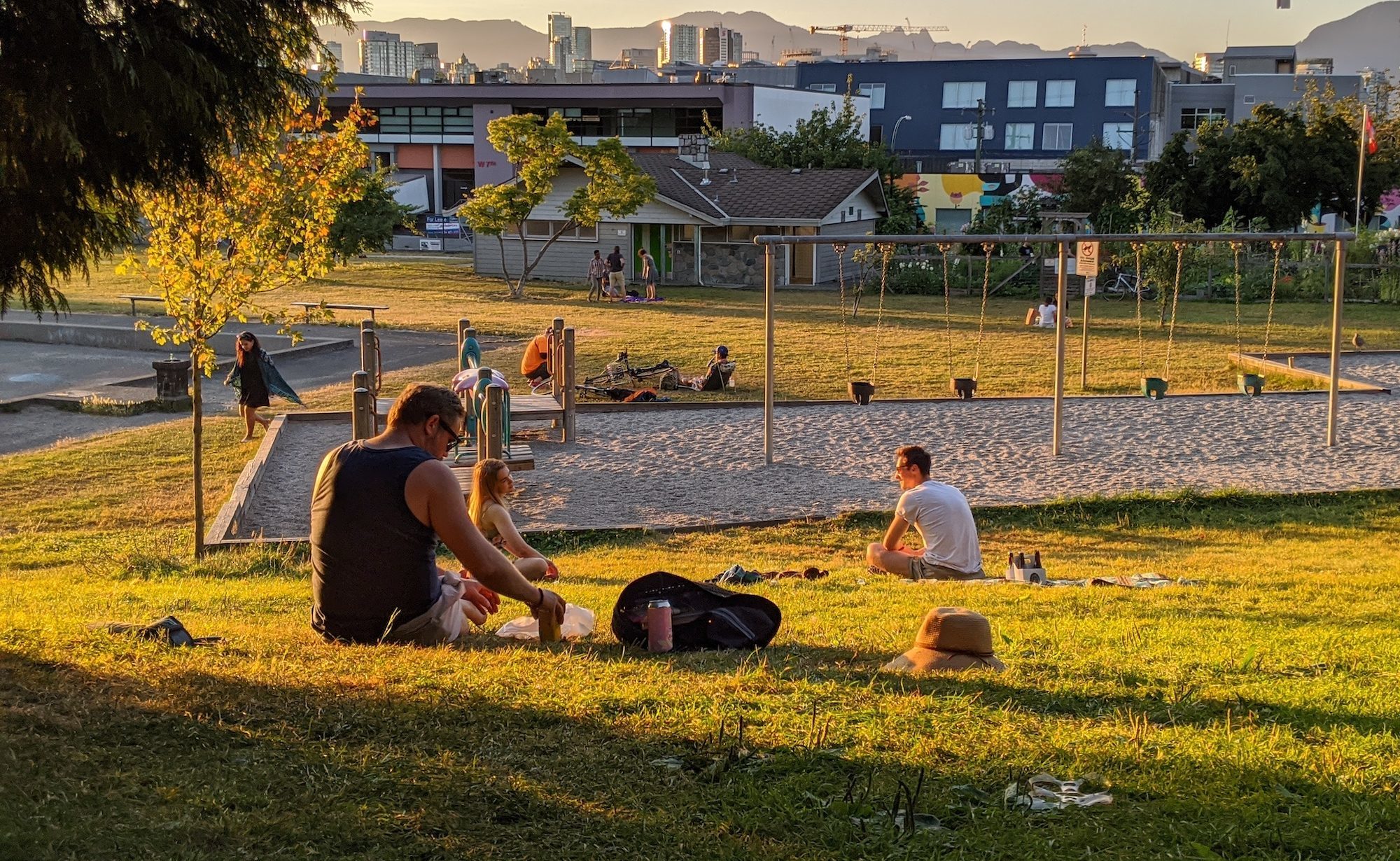 While Vancouver has an extensive and impressive park system, historically, there has been an inequitable distribution of park investments in the city. The Vancouver Park Board’s VanPlay Master Plan recognizes this discrepancy and seeks to address this inequity by using indicators to identify and prioritize geographic areas most in need of additional park investment, known as Initiative Zones.

With support from the Vancouver Foundation, Park People surveyed and interviewed people living in the identified Initiative Zones.

Here is some of what we learned about parks from participants living in Vancouver’s Initiative Zones.

Parks are vital, but many are left out

“Being near the water, the rhythm of the waves always calms me. I can feel the tension and stress leave my body, and when I leave, I feel ready to face the world again” – Rose*

“The experience in parks is irreplaceable. I love being in this public space where you can see other people running, playing, walking, laughing, and interacting. That’s really hard to mimic anywhere else” – Theodore

Across the board, people recognize that parks can benefit people’s mental and physical health and help build strong social and neighbourhood connections, which are key to community resilience.

Over 97% of the survey respondents from Vancouver’s Initiative Zones agreed that parks play a significant role in their well-being and quality of life.

However, our research indicates that people living in potential Initiative Zones feel they don’t influence the parks in their communities.

Of our survey respondents:

The park from Luz’s perspective

The interview process highlighted why individuals in the Initiative Zones are less likely to engage in park decision-making. The interviews surfaced the following barriers to park engagement:

Whether it be family obligations, chronic pain, long working hours, depression, or social anxiety, the life pressures and realities of people living in equity-deserving communities leave them feeling they have little time “leftover” for time-consuming park engagement processes. So, while parks play an essential role in people’s health and well-being, those who most need parks most are least likely to have the time or energy to devote to shaping their parks.

Negative experiences with past engagement

Many participants expressed that they were disappointed by past park engagement experiences. These negative experiences made them reluctant to contribute to future park decision-making processes. For example, Molly shared that while she’s previously tried to submit park service requests through 311, her claims were rejected because she didn’t categorize them correctly. These kinds of negative experiences leave people demoralized by unduly complex and cumbersome bureaucracy.

Don’t feel welcomed by the process

Youth, in particular, feel left out of park engagement processes and, as a result, aren’t motivated to engage. Young people shared that in-person engagement events can be very intimidating for young people who worry that their contributions won’t be taken seriously by adults. A lack of youth-targeted outreach and engagement is particularly unfortunate because the planning processes underway today will likely be implemented when these youth enter adulthood. In short, young people are missing the chance to shape the city and community of their future.

“I think the biggest barriers to participating in engagement processes are energy, mental health, and time. For the most part, everyone I know is super burnt out, so they really don’t even feel empowered enough to participate in anything like that. Everyone’s kind of facing their own mental health thing, and the idea of putting energy into a process that probably isn’t going to do much doesn’t really seem worth it. Like what benefit are you going to get out of spending two hours at City Hall when you could spend those two hours preparing food for the next day or just watching TV and relaxing because you’re so tired?” – Rose

The research indicates that people living in Vancouver Initiative Zones don’t always feel safe or welcomed in their parks. Participants also highlighted that their parks do not appear to be well cared for. Respondents shared that a lack of quality park spaces and amenities keeps them from spending time in their parks. For example:

The park from Patrick’s perspective

Participants in potential Initiative Zones identified several opportunities to improve park engagement and park use in their communities. Here’s what they recommended:

It’s vital that park programs and processes are deliberately designed for people who live in these communities. People engage in parks when they see their interests and identities reflected back at them. This is what creates a sense of belonging.

For example, the only time one participant, Ace, ever went to City Hall was for a Black History Month event. Similarly, Molly became more involved in her park when she came across a beginner skateboarding drop-in event that was created specifically for moms. From there, Molly grew her park engagement, participating in an event to inform Vancouver’s Skateboard Amenities Strategy.

Even if people don’t directly participate in culturally relevant park programs, the interview participants shared that they benefit from seeing others in their community being meaningfully engaged in their parks.

“I like the group of ladies who dance to Chinese music in that sheltered area at Slocan Park. They, and other groups, hold their exercise classes there, and I’ve missed seeing them this past year… They look like they’re having fun always.” – Fern

While many participants expressed safety concerns about their parks, they underscored that increased police presence is not the solution. In fact, quite a few respondents shared that increased police presence in the park would make them feel far less safe. Participants suggested that building strong community connections through park involvement would help improve perceptions of safety in parks. Patrick said, “when you get to know your neighbours better, community safety increases without the need for police presence.”

Several participants highlighted methods to better connect young people to parks. Susan suggested that the Park Board start using Tik Tok for youth outreach and consider the “instagrammability factor” in park designs. She emphasized that while teens may show up at a given park to take photos, once they’re at the park, they’re more likely to stay and benefit from the experience.

The park from Molly’s perspective

Participants underscored that youth engagement is tied to better park engagement and access overall. This is particularly true for individuals who are not comfortable communicating in English. As one young participant noted, she’s been filling out and translating important technical documents for her parents since the age of 12, an experience many children of immigrants can relate to. In some cultures, older generations are more likely to trust information or take action on issues when the information comes from a trusted family member or friend. We heard from journal participants that their parents and grandparents are more likely to trust information coming directly from their children than from a government body or the internet. Participants shared that young people can help make park experiences more comfortable for adults who may experience challenges such as language or trust barriers.

Our research with participants living in Vancouver’s Initiative Zones demonstrates much of what we learned in Park People’s Sparking Change Report, which found:

“Parks are not simply green places of respite with grass and trees—they are critical pieces of the social infrastructure of our cities. And we believe they have a role to play in creating more inclusive, equitable places that are shaped by and for the people living there.”

We need to create parks that are designed for and accessed by those who can most benefit from them. The Vancouver Park Board’s forward-thinking VanPlay Master Plan goes a long way toward creating more equitable park resource allocation. As the research highlights, we need to ensure that equity-deserving communities feel heard in the planning and management of parks and that parks are designed to ensure the benefits of parks are equitably distributed.