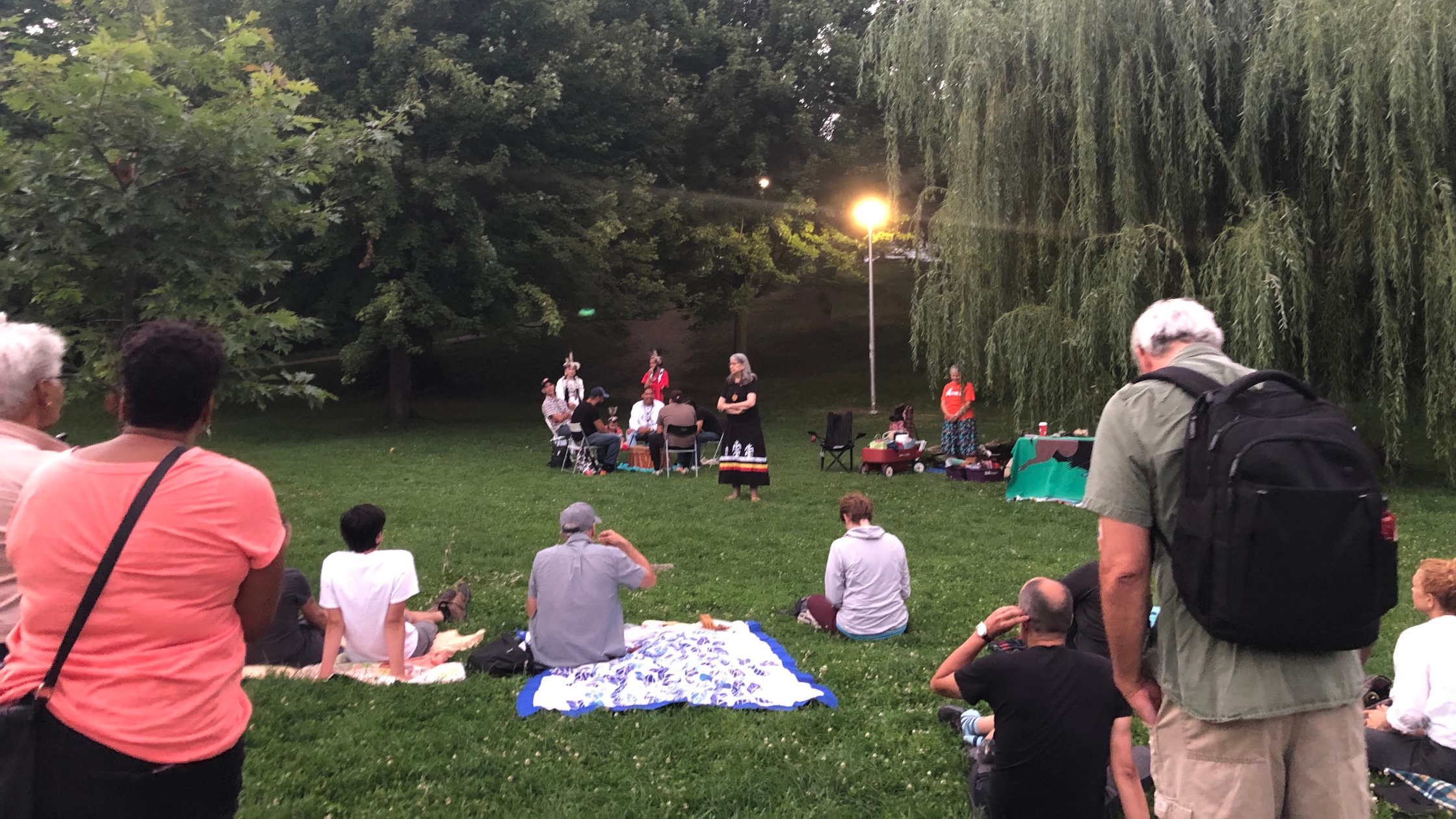 We Need to Be People of Action

This summer, Park People’s Sparking Change and TD Park People Grants programs in Toronto connected 36 equity-deserving community park groups with training, networks, seed funding and coaching to support city parks as places that connect people to nature and each other.

Many grant recipients around Toronto are activating community parks as sites of decolonization and reconciliation. One of these is The Indigenous Peoples Solidarity Group (IPSG).

The IPSG at St. Matthew’s United Church was founded in 2018 to offer and foster local leadership in building balanced, just relationships with Indigenous people, the land, the water, and all living beings. In addition to hosting year-round events, a core group of 20 volunteers steward the green space beside the church, located in Toronto’s Corso Italia neighbourhood.

During an August evening golden hour, Wesley Reibeling met with Elder Catherine Brooks to talk about The Indigenous People’s Solidarity Group, reconciliation and moving toward building a better future together. Earlier that evening, Elder Catherine Brooks, the IPSG, and local leaders and community members joined together to launch the National Healing Forest initiative in what is now known as Bickford Park. 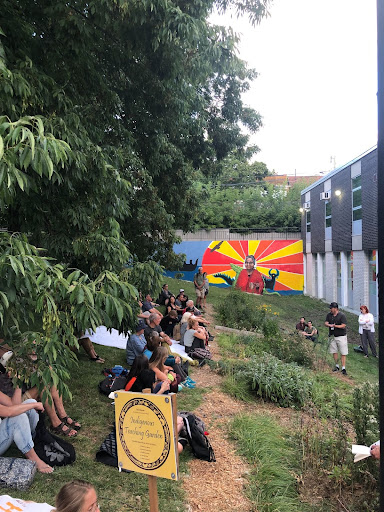 Elder Catherine encouraged the IPSG to become the first Toronto National Healing Forest initiative, joining 9 other projects from coast to coast “in the spirit of reconciliation”.

This initiative is an invitation to Indigenous and non-Indigenous communities, organizations, and individuals to create green spaces across Canada, to honour residential school victims, survivors, and their families, as well as missing and murdered Indigenous women and girls. 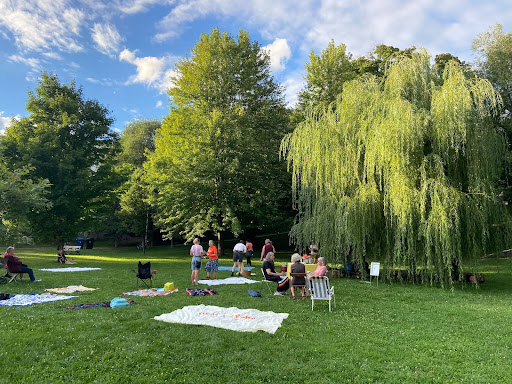 Wesley: How did you get involved with The Indigenous People’s Solidarity Group?

Elder Catherine Brooks: “Well, first of all, one of the co-leads, Robin Buyers, and I met years ago when I was the Executive Director of a native women’s shelter. She was teaching at George Brown College in Community Work. She had her students do little fundraising projects for us, because, of course, what are shelters always short of? Money, or what we would call “Zhooniya”.
She became a friend over time and invited me to a book talk from author and journalist Tanya Talaga. The book group was very thoughtful and there seemed to be a lot of care put into it.

So I got kind of interested in going to the book talks, and then they said to me, “Well, how would you like to be our elder in residence at St. Matthew’s Church?” And of course, I kind of went, “I beg your pardon?”

So I thought about it, and I thought if we’re going to do this work towards reconciliation, then maybe this isn’t a bad idea. You know, maybe this is actually a good idea! So I went and talked to a Traditional Healer, whose judgment I really trust and respect. And they said, “It’s certainly something that hasn’t been done, and we should do new things.” So here I am.

And then initially, I began by doing various types of ceremonies and we have continued in terms of looking at ways to support Indigenous people. And that’s exactly what the group does.

So I’m kind of guiding them but they come up with their ideas. They have been doing that since before I was here and I give them credit for that.”

Wesley: How can we work together toward reconciliation in parks and respect for the land and our environment?

Elder Catherine Brooks: “I think it was one of the Cree chiefs, who said, ‘When the last tree is cut down, the last fish is eaten, and the last stream poisoned, you will realize that you cannot eat money.’

And you know, you can’t go fly up there [to space] and move up there, as there won’t be anything to send up there to keep you going. You’re not going to go live on Mars. What would be better, is if we all had enough to eat, a place to live, and decent education for our children and work on teaching not to wreck the planet.

Our job is supposed to be stewards of this place, keep it safe, and also express our gratitude and appreciation to creation, for being here, for being alive. People are just beginning to realize what a miracle it is to be human beings and all these wonderful things to exist. So we’re just beginning to have that sense of connection.

I think a great example of this is how the Indigenous People’s Solidarity Group is using gardening to teach respect for the land. Teaching young children and grown-ups to love the land and to take care of it so that they can understand the relationship between the bees, the plants and having corn and food. By doing this, you are teaching them to know that this is a really important matter because this is how we live. Everybody lives off the land, in a manner of speaking, because that’s where our food comes for, so we are all benefiting from that.”

Funding through the United Church, Pollinate TO, and Canada Summer Jobs allowed IPSG to expand their work exponentially in 2021 and into 2022, recognizing Catherine Brooks as Elder-in-Residence, hosting online and outdoor events, and hiring youth to assist in maintaining the garden space, and to re-design the north end of the green space at St. Matthews United Church with over 50 native species.

The Strawberry Moon Feast and Ceremony celebrates the strawberry. The strawberry is the first berry of the season, which is often represented in Indigenous culture as a berry of connection, maintaining and fulfilling relationships. Full Moon ceremonies celebrate Grandmother Moon, the waters, and women as keepers of the waters. 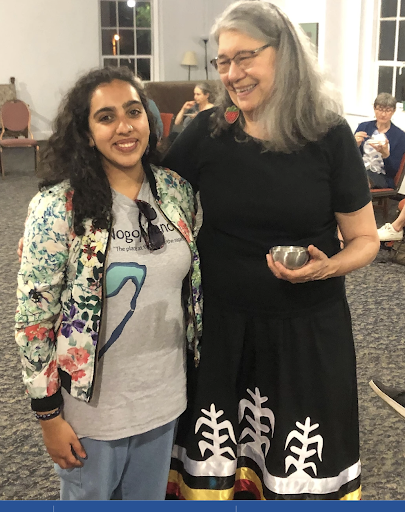 Park People’s Ayesha Talreja and Elder Catherine Brooks pose for a photo at the Strawberry Moon Ceremony in June 2022.

At the event, Women, 2 Spirit, trans and intersex people were all welcome to join in the ceremony. Subsequently, they gathered inside for a feast of traditional foods, songs and teachings led by Elder Catherine Brooks. Men and others not participating in the moon ceremony remained outside in conversation with a Firekeeper. Once the moon had risen, everyone congregated around the sacred fire to make offerings together, while bowls of water were used to reflect the moon.

As Elder Catherine told me during the interview, “If we only could learn how to live here in peace and harmony with our fellow beings. Nothing in the world, like this tree, the grass, the sky, the water, nothing needs us. But we need everything. Our job is to be stewards of this place, keep it safe, and also express our gratitude and appreciation to creation, for being here, and for being alive. People are just beginning to realize what a miracle it is to be human beings and for all these wonderful things to exist. So we’re just beginning to have that sense of connection.“

Some examples of this connection include a Territorial Acknowledgement that was raised at St Matthew’s United Church in 2020, and a Food and Traditional Medicine Garden was planted, Noojimo’iwewin Gitigaan — Healing Garden.

The transformation of what was once grass on infill from 150 years of city-building to a Healing Garden. Noojimo’iwewin Gitigaan is situated on a busy St. Clair West corner, in the Bracondale Hill and Wychwood area. The garden’s location helps engage passersby in the neighbourhood which is key to expanding the garden’s reach. Members of the community stewarding the small greenspace adjacent to St. Matthews United Church,  (IPSG) and volunteers have modelled how small green urban spaces may become sites of re-connection with nature and recognition of Indigenous spirituality.

Elder Catherine and Wesley discussed better ways forward and how to work together toward better futures and this is what she had to say; “People, spirits are so resilient – or you, and I wouldn’t be talking.

And it’s true of the other people who came here too. Some of the people that came here were leaving because things were hard. In Europe, a reason the bubonic plague kept killing so many people in waves is that they just didn’t have food and when they came to the New World– or what they call the “New World” – Turtle Island, and South America, then they discovered all the potatoes, different kinds of potatoes, tomatoes, corns, beans farms, squash, and tobacco, which is sacred to us. You know, the prophecy did say we’re all going to meet up. We have the ‘Noah’s Ark’ of human beings here on Turtle Island.

With municipal elections coming up here in Toronto, Elder Catherine offers some great advice about how to help Indigenous issues be front of mind for municipal leaders:

“Listen to me, you know, it makes a difference in who gets elected– and you know, the difference between good and fair is much less than the distance between fair and bad, ignorant and indifferent. If you want to help Indigenous people, elect people!“

Go talk to those people you elect and say you care about our issues because they listen. I think most people who get elected do want to serve in a way for the public. Here’s the thing we need that support. It doesn’t have to be every week, but maybe go once a year and knock on their doors, because we have the right to be represented, whether we voted for them or not. That would be an incredible help.”

“Go visit your MP and MPP and tell them you care about Aboriginal issues and Indigenous issues, women’s issues, LGBT+ issues. Get out there and support people! That will bring about the change we want to see. Never give up. We wouldn’t have made as much progress if we had given up. If our ancestors had given up, we as a people wouldn’t be here today. “

If your city or local community is having municipal elections coming up this season, this is a reminder to get out and vote and vote with the community in mind when you cast your ballot.

Generously Supported by The Balsam Foundation, The Howard and Diane Taylor Family Fund, The John and Marian Taylor Fund with additional support from: