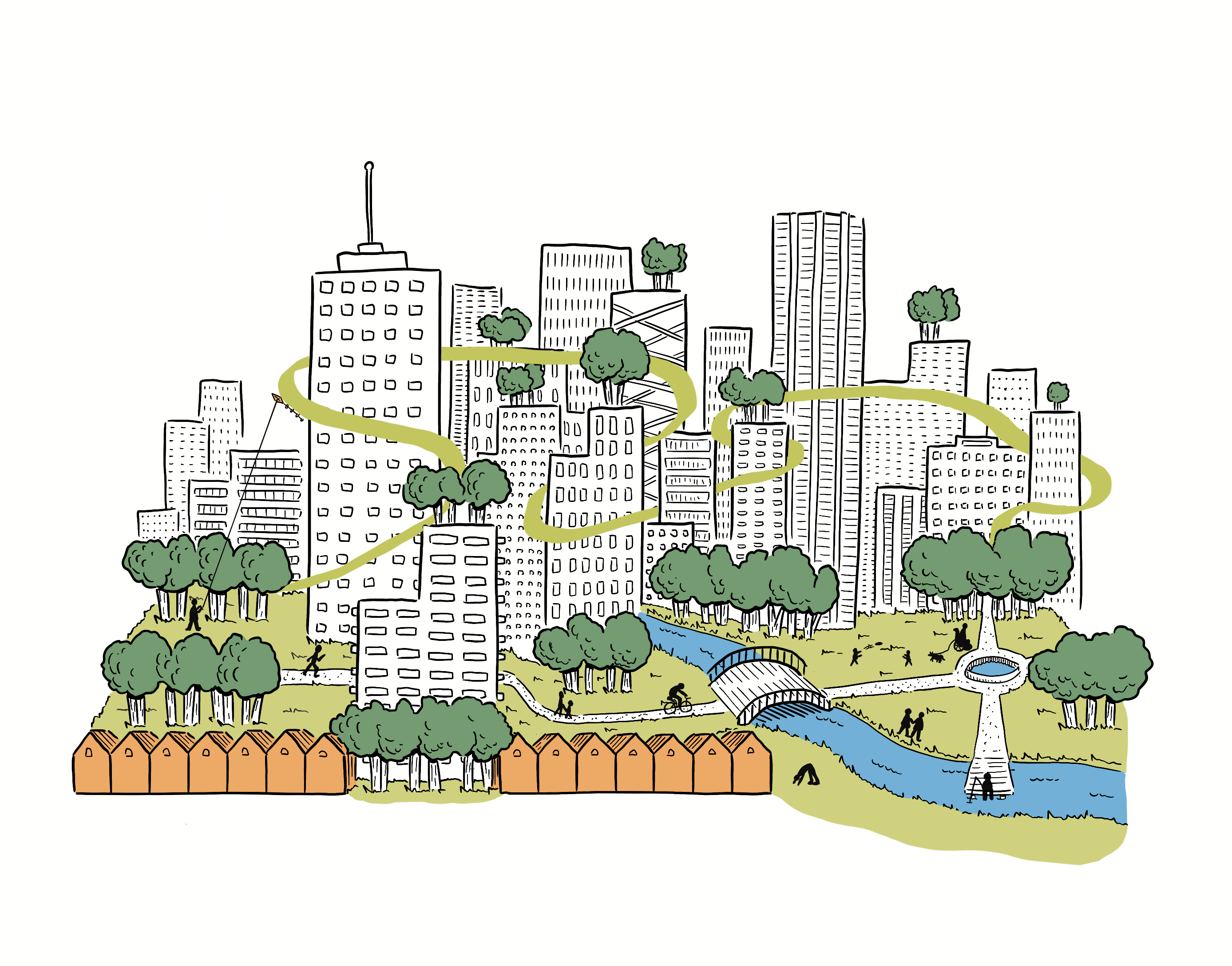 Park People Ten Years Out: A Reflection and a Look Forward

This contribution from Ken Greenberg is part of Park People’s 10 Years Together in City Parks. Be sure to check out all of the contributors throughout the year.

Parks have a remarkable capacity to enhance the city, connect communities, improve the quality of life for citizens of all ages, overcome social isolation and loneliness and provide access to the healing properties of nature. When people come together around their parks they increase social capital and develop deep roots in their communities, strengthening networks and overcoming polarization by directing attention and resources to underserved areas and populations.

One critical question has been, how to meet an ever-expanding demand for park space as urban populations grow and intensify. The key demand of city residents across Canada, expressed over and over in community meetings about intensifying development, is the call for more and improved parks and open space as part of an expanded public realm. This is the dilemma. How can Canadian cities get ahead of the intense development curve to shape a dynamic and growing city around a forward-looking program for expanding their network of parks? Another critical question revolves around how to ensure that all areas of the city and in particular disadvantaged neighbourhoods that lack meaningful park space are well served and treated equitably.

In some cases, while there are open spaces that may appear as green on a map, they lack amenities and are hard to access for much of the population, poorly related to people’s daily lives. When Covid-19 burst on the scene in 2020, if anything it functioned as a ‘particle accelerator’ highlighting deficiencies and vulnerabilities and in many cases pushing us to do things we were already trying to do more rapidly and nimbly. Among other things, it has put an intense spotlight on our need for parks as a vital release from our forced confinement. What follows are some thoughts on where the lessons of this moment might take us in the next decade. In dozens of cities around the world, we are seeing an irrepressible demand for safe and accessible outdoor space and people have been taking to their parks like never before. The park has become Canada’s version of the Italian piazza, our essential shared commons. I see it in my neighbourhood in Toronto, where every available park space has become an intensely used outdoor living room for all ages late into the evening hours and even in winter.

This intensified use of our parks is a reflection of the desire to be outdoors while respecting physical distancing, but it is also revealing an entirely new way of seeing and using the city and being with each other and as we experience this change in our lives, the momentum is unlikely to be reversed post-Covid. The ‘improvised’ shift is dramatically accelerating a movement that was already underway. On the one hand, an increasing desire for urban living was already leading to a greater need for shared public space. Meeting this need in traditional ways was thwarted by high land costs for acquiring traditional parks. The need for more space was accompanied by a change in how we use that public space and the kinds of experiences we seek, more fluid and interconnected, leading to new forms like linear “greenways” reflecting the shift from auto-dependent lifestyles to active movement — cycling and walking.

Covid 19 raised the ante. It begs the question of what our next public spaces will be as we continue to evolve into great and densely populated cities. The current moment offers some clues. It is not only about the quantity of public open space — in conventional planning terms we were focused on the square metres of parkland per inhabitant within a given radius — and while this is important, it is actually more important to focus on the quality and usefulness of that space and how it enhances our lives.

We are now seeing dramatically how public space is not a frill or a non-essential “nice to have.” A generously endowed and welcoming network of public space offers significant benefits to public health, both physically and mentally. We were already in the midst of a public health crisis, exacerbated by sedentary lifestyles where an overreliance on the automobile and a tendency to spend long hours in front of screens has produced an epidemic of obesity as well as increases in diabetes and heart disease — especially alarming among children.

This health crisis puts a premium on public spaces where people of all ages can get out and participate in active pastimes, from simply walking and cycling to a whole range of year-round sports and athletic activities close to where they live and work, making these health-promoting activities part of their daily life routines. Betsy Barlow Rogers the founder of the Central Park Conservancy, presciently commented that “as the city becomes more park-like, the park becomes more city-like”. In other words, a fusion as the hard boundaries are breached. The entire city can become greener and more park-like and connected for people on foot and on bicycle. Fostering residents’ ability to move around relatively freely and experience more of the city this way will help to break down the perceived barriers between neighbourhoods and districts as flows become more continuous.

The elements of the public realm that serve as green links between areas will play a vital role in helping to make the city feel like a seamless whole. In this spirit, London has declared itself an entire National Park City. With time, it can be anticipated that the examples of connection that we are creating ‘on the fly’ today will become the rule. With the shift to a more expansive sense of a park-like public realm, a new liberating “reading” of the city will emerge, no longer orienting itself only or primarily by highways and major arterials but increasingly by connected networks of common space serving as guideways throughout the city.

When we look at the city through fresh eyes, this reopens the question of what constitutes a park. Putting together all the pieces of the public realm — laneways, street redesign, ravines, hydro corridors, rail lines, stormwater management systems, flood-proofing plans, and transportation initiatives, a vastly expanded public realm can emerge, one that addresses many of the city’s current deficiencies. This new realm will be different, both in scale and kind. Rather than discretely bounded public spaces carved out of a grid of street blocks — parks and squares — this new kind of public space has the potential to become the fully continuous, connective tissue of the urban fabric itself. This more expansive idea of the entire cityscape as a landscape, where flows become more organic and seamless in some ways gets us back to an indigenous pre-colonial sense of the land we inhabit as a generous shared “commons,” no longer hard-edged and hemmed into defined boundaries. Capitalizing on this expanded perspective of what a park is and can be will be the emerging agenda for the next decade, and Park People will play a vital role in shaping that agenda. For the past decade, Park People has been advocating for enabling parks to reach their full potential, by opening up to more community-initiated life and activity, making more use of volunteers, running local cafes, food stands, and community gardens, bringing more sources of funding and sweat equity and engaging underserved communities.

When Park People was founded in 2011, I was privileged to serve on its Board, and later my wife, Eti served on the Board as well. Park People, with its highly talented and passionate staff, quickly became a meeting place for those who cared about parks, linking park groups from across Toronto who were unaware of each other’s existence. Its role was part lobbying, part networking, part sharing experience, and overall gaining strength in numbers in dealing with city hall. Soon city staff and politicians also began to see Park People as an essential ally and a conduit to local communities. That was how it started, but who could have imagined how far Park People would come in the following years.

The first five years were dedicated to connecting and supporting Toronto’s robust network of community park groups, park professionals, non-profit groups and funders. But as Park People continued to grow, other cities across Canada were paying attention and expressed their own needs for an organization and network to support their work in parks. So in 2017 Park People launched its National Network at its first National Conference in Calgary. Now, in 2021, as Park People celebrates its tenth anniversary, the Park People Network is made up of 850 park groups in 46 Canadian cities, in every Canadian province. There are 30 staff across Canada with offices in Vancouver, Toronto and Montreal. The board is national and includes many dedicated park champions, city builders and leaders. Park People’s Canadian City Parks Report, now in its third year, is Canada’s only report on the trends and challenges facing city parks. A range of innovative programs supports programming in underserved communities, creative park projects and events, and community engagement across Canada. Several park initiatives manifest what Park People calls “the power of parks” and will be profiled in this series marking the organization’s ten-year anniversary.

As these examples attest, the prospects for innovation in park development and stewardship in Canada are very promising. A strong foundation has been laid in the past ten years by Park People, identifying needs as well as opportunities, mobilizing community resources and stimulating Canadian cities to act. In the process, new horizons have been opened up. It will be inspiring to experience these remarkable new park spaces and see what comes next.

Ken Greenberg is an urban designer, teacher, writer, former Director of Urban Design and Architecture for the City of Toronto and Principal of Greenberg Consultants. He is a recipient of the Order of Canada and served on Park People’s Board of Directors for eight years and played an integral role in establishing the organization.

This contribution from Ken Greenberg is part of Park People’s 10 Years Together in City Parks. Be sure to check out all of the contributors throughout the year.

Thank you to our generous supporters: